Davis is the son of Star Davis and Noah Brooks. Davis was conceived by his parents, Star and Noah when they shared a secret affair on tour and was believed to be Jackson's son but turned out being Noah's son after being born. It was implied in the episode, Who's the Daddy that Noah and Star slept together while on tour and he could possibly be the father. But it wasn’t confirmed until Zion.

Davis was born on Christmas Eve night in the back of an ambulance surround by his parents, close family & friends. Star goes into labor in the middle of proposing to her boyfriend, Jackson as she’s about to go on stage to perform her & Noah's hit song, Breathless. But while she's talking to Jackson, her water breaks and the baby is on the way. Unable to make it to the hospital fast enough, Star delivers her son in the back of an ambulance surrounded by her close friends and family which included: Carlotta, Simone, Noah & Jackson, who at the time believed he was the father until visibly you could tell after the birth that the father was Noah.

Davis was born on Christmas Eve night in the back of an ambulance surround by his parents and close family and friends. Where is revealed to be the son of Noah.

Davis' temporarily taken away by Child Protective Services after Star goes to jail and Noah's toxicology report comes back inclusive but when the test turns out to be wrong, he's given back to his dad, Noah & his half-aunt, Simone.

Davis is taken away from his father by his half-aunt after Noah gets high and causes a fire, putting Davis at risk. 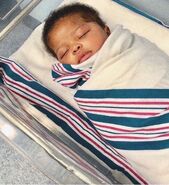 Add a photo to this gallery
Retrieved from "https://star.fandom.com/wiki/Davis_Brooks?oldid=4558"
Community content is available under CC-BY-SA unless otherwise noted.